Click here to edit the Social Media Links settings. This text will not be visible on the front end.

Bidding Wars All Over the City 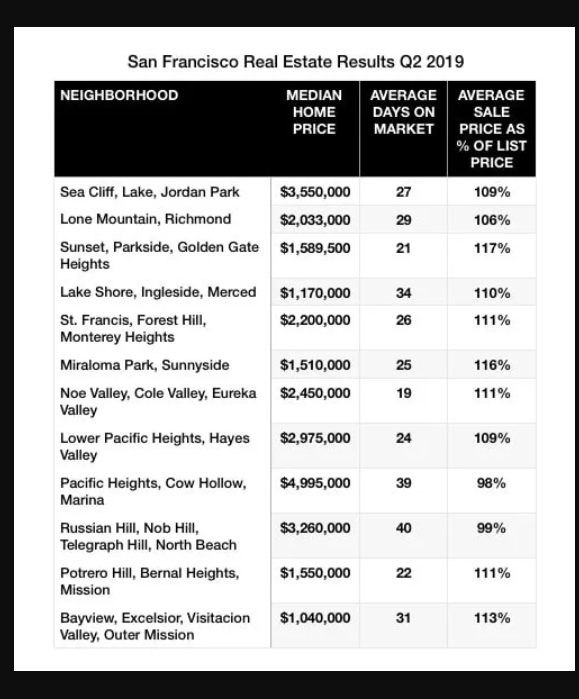 Sluggish Real Estate Markets in the Bay Area? Not in San Francisco.

The housing market may be slowing in some parts of the Bay Area, but it is still strong in the city of San Francisco. First-time buyers are feverishly competing for available homes priced from one to two million dollars.

Be Ready for Bidding Wars

Single-family homes listed for under $3 million are selling at double digits above their asking prices in nearly every San Francisco neighborhood. And they are going fast — in contract at an average of 21 days on the market.

In Cole Valley, a single-family home listed at $2.68 million sold in July for $3.95 million. That is $1.27 million over the asking price! In June, two homes in Glen Park sold for 40 percent over their listed prices.

Single-family homes located in Miraloma Park and Sunnyside are closing at an average of 16 percent higher than asking. In Miraloma Park, buyers can find three bedrooms, two baths, and a two-car garage for around $1.5 million. In Sunnyside, similar homes (three bedrooms, two baths, one car parking) have recently sold for just under $1.2 million. A rarity in San Francisco where the average list price for single-family houses is now $1.7 million.

The higher-end housing market is moving slower. Homes priced above $4,000,000 are sitting longer on the market (40 days) and selling at an average of 99 percent of their listing prices.

Thank you for your inquiry.